Paris. La Ville-Lumière. The City of Light. Spanning 40 square miles and home to over 2.2 million people, there’s nearly an infinite amount of things to do and see in the capitol of France. Here is a list of sites I highly recommend visiting while you’re backpacking through Paris. Eiffel Tower Self-explanatory. This iron lattice tower, constructed in 1889, is now the world’s most-visited paid monument in the world.

The cathedral is widely considered to be one of the finest examples of French Gothic architecture and among the largest and most well-known church buildings in the world. On certain days, you can see a piece of the true cross and the crown of thorns.

Near Notre Dame in Ile de la Cite, you can find an incredibly beautiful royal medieval Gothic chapel that was built in the 13th century. It’s like walking into a work of art. 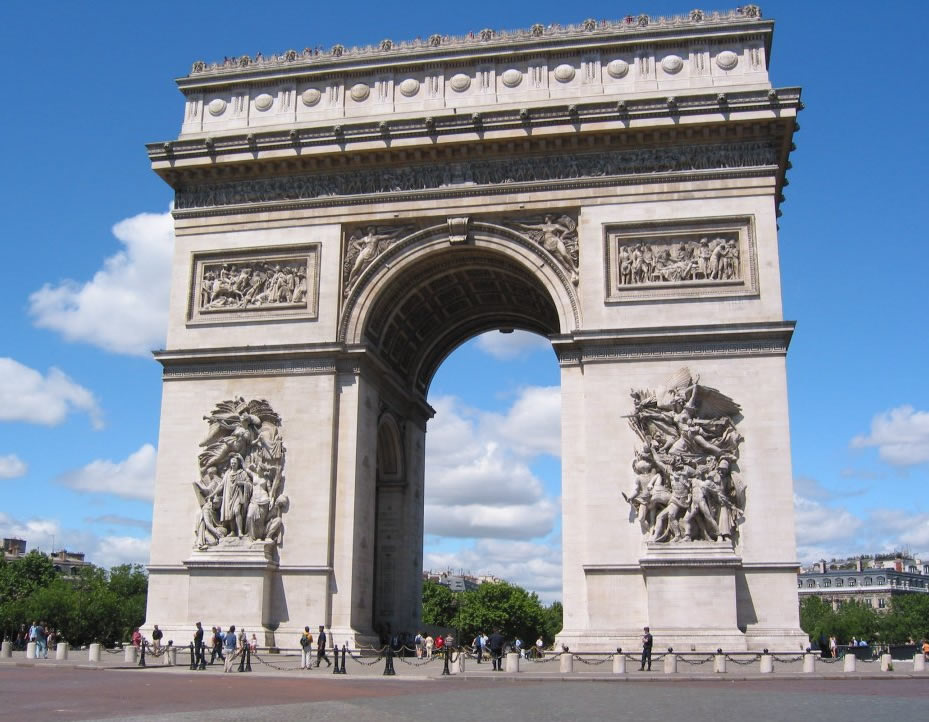 This famous street is one of the most expensive pieces of realty in the world. Visit famous stores like Louis Vuitton, catch a movie at one of the cinemas, or have a snack at a cafe. To the east, you can visit Place de la Concorde and view the Obelisk of Luxor; to the west, visit Place Charles de Gaulle and see the Arc de Triomphe.

These underground ossuaries hold the remains of around six million people. Tourists can take a guided path through part of the catacombs and become frighteningly aware of their own mortality.

The Palace of Versailles is located just west of Paris. It’s easy to take the RER train from Paris to its suburbs – from the center of Paris, the trip to the palace is just under an hour. French royalty resided here; most famously, Marie Antoinette and Louis XVI.

Obvious. You’ve got to see the Mona Lisa.

The Centre houses one of the largest modern art collections in the world. Plan to walk around for at least two hours. Dedicated to the one and only Auguste Rodin. The collection includes 6,600 sculptures, 8,000 drawings, 8,000 old photographs and 7,000 objets d’art, including The Thinker, The Kiss, and The Gates of Hell.

What used to be a railway station now houses the largest collection of impressionist and post-impressionist masterpieces, by painters including Monet, Manet, Degas, Renoir, Cezanne, Seurat, Sisley, Gauguin, and Van Gogh.

Les Invalides was once a hospital and retirement home for war veterans; now, it houses the Musee de l’Armee, the military museum of the Army of France, the Musee des Plans-Reliefs, and the Musee d’Histoire Contemporaine, as well as the burial site for a few war heroes, including Napoleon Bonaparte.

This museum is dedicated to the history of Paris, from the time of Julius Caesar to the 20th century.

This is the largest cemetery in Paris and includes three WWI memorials. Visitors can also find the famous graves of Jim Morrison, Oscar Wilde, and Chopin, among many others.

Many of France’s intellectual and artistic elite are buried here.

The Luxembourg Gardens is the second largest public park in Paris. A must-see.

The Tuileries Garden is a public garden located between the Louvre Museum and the Place de la Concorde.

Take a walk through the old art district, Montmartre, to see the Basilique du Sacré-Coeur de Montmartre. The landmark is extremely popular and located on the highest point of the city. I also recommend seeing the Montmartre cemetery and Moulin Rouge, which is just down the hill in the Pigalle district. Yes, it’s the famous bridge with the locks. Lovers come from all over the world to write their names on a lock and put it on the bridge to symbolize eternal love.

I’m a huge fan of this place. The Shakespeare & Co. Bookstore was opened in 1951 and sells English books. It’s very close to Notre Dame and easy to find.

Paris has a myriad of other places to see. After you hit a few of these major sites, I recommend simply exploring a few of the cities’ numerous quarters–each has its own unique history and feel. Le Marais is a fashionable district, while the Saint-Germain-des-Prés area was home to the existential movement in the 20th century. You can find the most delicious couscous in the Latin Quarter.

Enjoy your time in Paris, and remember that the best adventures happen when you’re not looking for them.