My trip to Oxford (10/5) seems like ages ago, but hopefully some pictures can jog my memory: 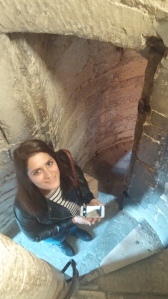 My friend Sara on one of the 127 steps in St. Mary’s Church 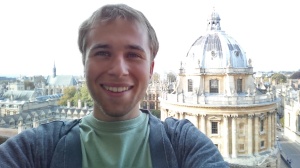 View from the St. Mary’s Church overlook, Radcliffe Camera in the background

We (myself and a group of Italian exchange students) walked around some of the Oxford University campuses (Oxford is made up of several smaller colleges) and walked through a couple free museums. Because we had arrived in Oxford fairly late in the day and spent a bit too much time getting lunch, our opportunities to sight-see were limited.

The next day (10/6), I took my first trip to London, accompanied by Sam and Charlotte, two Americans that I met in my first week at Reading. We took the train to Paddington station and walked through Regent’s Park, got lunch at a Thai restaurant, and saw the Victoria and Albert and the London Science Museum. I ran into a familiar friend at the Science Museum:

NOAA’s Science on a Sphere!

After a long day of walking in the rain, we stopped for a coffee and quick bite at Cafe Nero: 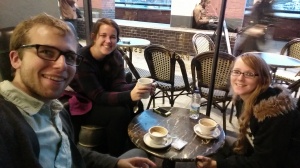 With Charlotte and Sam

After coffee, I split up with Sam and Charlotte to meet up with my Performance and Nation classmates at the National Theatre to see a production of “Our Country’s Good” by Timberlake Wertenbaker, a comedy-drama about the staging of a play by convicts and Royal marines at the New South Wales penal colony, a settlement which would eventually grow into modern-day Australia. 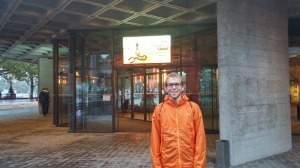 In front of the National Theatre!

After a full week of classes (actually I only have classes on Thursdays and Fridays, so definitely not a full week…a half week maybe?), I returned to London on Saturday (10/10).

I went exploring on my own on Saturday, and what a day it was. After getting out of a pedestrian traffic jam around Buckingham palace, I walked southeast, across the Millennium Bridge (see Facebook profile picture) and over to the Borough Market for lunch. The Borough Market is a big farmer’s market with more food stalls than you can count and plenty of free samples. Savory aromas filled the air and I found it very difficult to decide what to get for lunch, eventually picking an Indian vegetable curry dish served with basmati rice (delicious).

After a singular culinary experience, I walked to the Tate Modern art museum, where I spent a good while reading, examining, and enjoying the various works. A couple favorites:

a net made of steel wool! i don’t get it…

I made a last-minute decision to return to London again on Sunday (10/11) to participate in a world record attempt for “most people dancing the Charleston at the same time” with members of the Reading University Swing Dance Society. We are now officially world record holders!

On the train to London, feeling determined!

Speaking of cast-mates, here is the cast and crew of “Station X”, the show that I recently got cast in! This photo was taken after the first read-thru last night. The script is great, and I’m thrilled to be a part of it. Also, surely there are some bragging rights for being the only yank in the show!

Friday will mark a month of living in Reading–wow! It’s amazing how fast the time flies. The term ends in two months and I’ll be back in the states on January 4th after some extended travels in Europe. I have lots to do over the next couple months, and I’m taking full advantage of everything my time has to offer.